FAIRFAX, Va. – An articulation agreement between the Ohio Board of Regents and the seven unionized sheet metal training centers in the state will make it easier for new apprenticeship graduates to earn their associate’s degrees.

The first state-wide agreement of its kind in the nation, it allows sheet metal apprentices the ability to earn additional math and science credits during their apprenticeship they would have otherwise had to earn on a college campus.

“This agreement proves what we as an industry have been saying all along,” said James Shoulders, administrator for the International Training Institute, the education arm of the unionized sheet metal and air conditioning industry. “Apprenticeships are another side of higher education. If our Ohio apprentices choose to pursue their associate’s degree, they’ll already all but have it when they complete their apprenticeship.”

“It should be the difference between taking 10 more classes to earn the degree to two or three classes,” said Rob Gartner, training director for Sheet Metal Workers Local No. 24 in Columbus. “These guys work 40 or more hours per week, attend classes three nights a week and they have families. The fewer classes they have to take when they leave the apprenticeship, the better.”

“To me, the critical part is it puts all the sheet metal apprentices in Ohio in the same pool, so no matter where in the state that apprentice lives, or the college he picks, we set a common bar that everyone is going to hit,” said John Nesta, training coordinator at Sheet Metal Workers Local No. 33 in Cleveland. “It’s just another example of the quality of the training, the quality of the programs. It’s more validation from the outside about the higher levels of training we provide.”

Ohio is home to the third largest sheet metal apprenticeship system in the United States – behind California and New York.

Aside from credits earned, the agreement assures the industry that an apprentice in Cleveland will have a similar knowledge base and skillset as an apprentice in Las Vegas and Philadelphia, providing graduates the credentials to travel anywhere in the country to work.

“These apprentices put a lot of work into going to work, going to school to get a journeyman’s card, but that other piece of paper means a lot to them and their families,” Gartner said.

Currently, students from the Ohio, Kentucky and West Virginia border receive credit through Columbus State Community College. Once they graduate, they can transfer their credits and attend a college closer to home to complete their degrees, such as the applied science in HVAC degree.

The articulation agreement falls in line with the Registered Apprenticeship – College Consortium, a new effort launched earlier this year by the U.S. Department of Labor, in partnership with the U.S. Department of Education. The consortium promotes graduates of registered apprenticeship programs to turn their years of hard work into college credits.

“The decision to prepare a student for college or career is no longer an option in today’s competitive global economy,” said Arne Duncan, U.S. Secretary of Education in a release regarding the consortium. “To ensure a highly skilled and trained workforce that can compete with the best and brightest across the world, we have to train our students for college and career. This program provides a much needed pathway for students to develop needed technical skills while also pursuing a college degree, strengthening the middle class.”

To receive the exception, heads of math and science departments at Columbus State Community College, Cuyahoga Community College and Owens College researched the history of the unionized sheet metal apprenticeship as well as the instructors, training centers and curriculum.

“The college department heads were impressed with the quality of the International Training Institute curriculum and materials used by the Ohio Valley Coordinators group,” Gartner said. “The guys from the group – John Nesta, Gary Shinkle, Eugene Frazier, Dan Kline – they worked together to make this happen.”

The Ohio Sheet Metal Workers are the second union-affiliated training program to complete an articulation agreement in Ohio. The International Brotherhood of Electrical Workers (IBEW) also has completed a similar agreement, and the Plumbers and Pipe Fitters Union and Insulators Union are currently working on a similar agreement.

Those interested in the Registered Apprenticeship – College Consortium can visit doleta.gov/oa. For more information about ITI, visit www.sheetmetal-iti.org or call 703-739-7200. 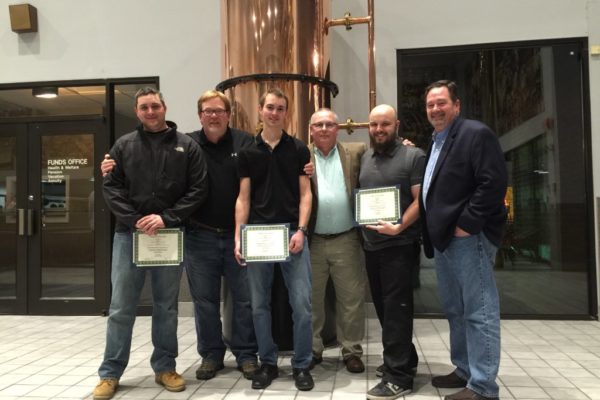