Percentage of female sheet metal apprentices at 4.2, double from 2015

FAIRFAX, Va. – To those outside the industry, sheet metal work may seem like a man’s world. Internally, journeywomen are thriving, and although the percentage of female apprentices is at 4.2 percent, that’s double what it was only two years ago, according to the International Training Institute (ITI).

Nationally, the construction industry in general is made up of 3 percent women, according to Chicago Women in Trades.

Partnerships and affiliations with women’s trade groups such as Oregon Tradeswomen Inc. in Portland; Chicago Women in Trades; Nontraditional Employment for Women in New York; and Building Pathways in Boston have helped training coordinators introduce women to a trade many love but fewer know much about.

Connie Ashbrook, founder and executive director of Oregon Tradeswomen, has worked with Sheet Metal Workers Local No. 16 in Portland since 1996. Together, they’ve increased the female apprenticeship percentage to 9 percent.

“If it wasn’t for Oregon Tradeswomen, I would be at 2 to 3 percent females,” said Kevin Roth, training coordinator for Local No.16. “It is the key to our success.”

Through the organization, women are introduced to many building trades in the area through a free, seven-week pre-apprenticeship class held four times a year. Participants are educated on the skills it takes to apply for a building trades apprenticeship, including the physicality of being an “industrial athlete,” Ashbrook said.

“It gives them a head start. Doing the physical fitness training helps them understand they’ll be sore for a while, but it’s OK. They’ll be fine and get over it,” she added. “They have the confidence to know it’ll improve. If it’s too heavy for a woman, it’s likely too heavy for a man, too.”

Carly Rush, 34, a second-year apprentice at Local No. 16, and Leah Jenkins, 42, a journeywoman, both found — and fell in love with ­— their sheet metal careers through Oregon Tradeswoman.

A mother of two young daughters, Rush’s first taste of hands-on work was in middle school, and even though she loved it, like many women, she was unaware of the career possibilities.

“I remember that being the one time I really enjoyed going to school,” she said. “I wish I would have had someone to encourage me in that direction. I wish someone would have pointed out in school how functional math is. I wish I knew how things worked when I was younger. I would’ve gotten started in something like this sooner.”

After admittedly hating most jobs in her life after less than a year, Rush said she actually enjoys getting up every morning to go to work at Alliant Systems, for which she installs commercial ductwork.

“This is the first job where I don’t mind getting up and going to work,” Rush said. “I don’t hate going to work anymore.”

There is no stigma. There are no outlandish expectations. The fact Rush is a woman, she said, doesn’t change anything on the job site. In fact, it’s not a big deal or a factor of her everyday life on the job. It’s more about attitude than gender, she said.

“No one has ever made me feel like I can’t do something because I’m a girl. I was more afraid they wouldn’t want me around because I don’t know how to do everything yet, but that wasn’t the case, either,” Rush said. “They only care about your work. If you’re willing to do the work, and work your hardest, you’ll fit in. It’s been a good experience for me.”

Jenkins, a journeywoman for eight years, agreed: “I don’t think many women want it to be a big deal,” she said. “People just want to be a part of the team and do a good job.”

For the last 12 years — most of her career — she has been a part of the team at Streimer Sheet Metal in the fabrication shop, which hosts tours for Oregon Tradeswomen.

“It’s a blast to have kids and young girls come in,” Jenkins said. “We make something and have a lot of fun. I know I was excited to see a female sheet metal worker whenever I saw one. It made me think, ‘Maybe I can do this. Maybe this is accessible to me.’”

Until Oregon Tradeswomen, Jenkins didn’t know much about the trade. Upon her introduction, working with metal was more attractive to her than any other trade.

“I enjoy the work. I enjoy the labor. I enjoy building things,” she said. “As far as my experience, it’s brought me out of my shell. I had a sense it was a diverse trade, and it is. The opportunities are really out there.”

Opportunities for women are what sheet metal training coordinators across the country and women’s trade organizations are trying to spotlight.

In addition to hosting education workshops and tours of the facility in hopes of enticing additional female interest, Roth works to bring in female training instructors as well as create a culture where men and women can thrive.

“The apprentices get the real story,” Roth said of bringing in female instructors. “It’s a female relating to a female. She can speak from experience.”

Last fall, the U.S. Department of Labor awarded a contract to Chicago Women in Trades’ National Center for Women’s Equity in Apprenticeship and Employment as part of a $20.4 million initiative to expand apprenticeship opportunities in the United States. The grant emphasizes expanding apprenticeship opportunities for women, people of color and other underrepresented populations. The Center will work with 10 organizations, which includes nearly every staffed tradeswomen’s organization in the country.

The project is led by Chicago Women in Trades and Oregon Tradeswomen and includes partnerships such as with the ITI to help attract and retain female apprentices in more than 150 training centers across the country.

Jayne Vellinga, executive director for Chicago Women in Trades, said she has two goals: make sure women are informed and prepared for opportunities and make opportunities available for women. This includes making sure training directors, for instance, have the tools available for recruitment and retention.

The partnership not only helps organizations introduce women to the trades, it helps build strong apprenticeship classes across the nation.

“This initiative will help us to reach even more women, from those interested in working in the trade to those who have yet to hear the sheet metal building trade is even an option for them,” said James Page, ITI administrator. “A diversified workforce makes us a strong workforce, and apprenticeship is a tried and true method to not only learn a skilled trade, but to invest in a person’s future. The ITI looks forward to working with this initiative to help build careers and change lives.”

For more information on National Center for Women’s Equity in Apprenticeship and Employment, visit http://womensequitycenter.org/. Additional information on women in the trades can be found at www.chicagowomenintrades2.org or www.tradeswomen.net.

ITI supports apprenticeship and advanced career training for union workers in the sheet metal heating, ventilation, and air conditioning (HVAC), welding and industrial, architectural and ornamental, and service and testing, adjusting and balancing industry throughout the United States and Canada. Headquartered in Fairfax, Virginia, the ITI develops and produces a standardized sheet metal curriculum supported by a wide variety of training materials free of charge to sheet metal apprentices and journeymen. For more information about ITI and its available training curriculum for members covering sheet metal trade work, visit sheetmetal-iti.org or call 703-739-7200. 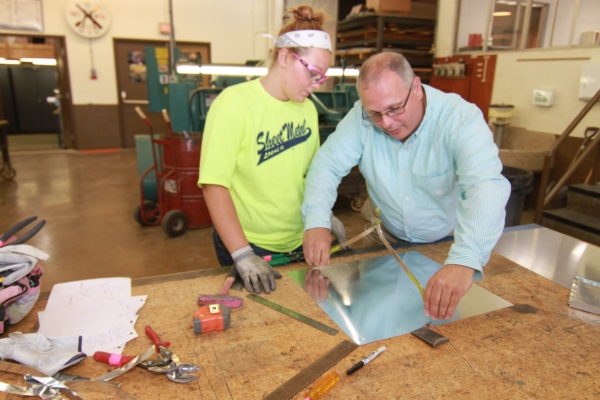