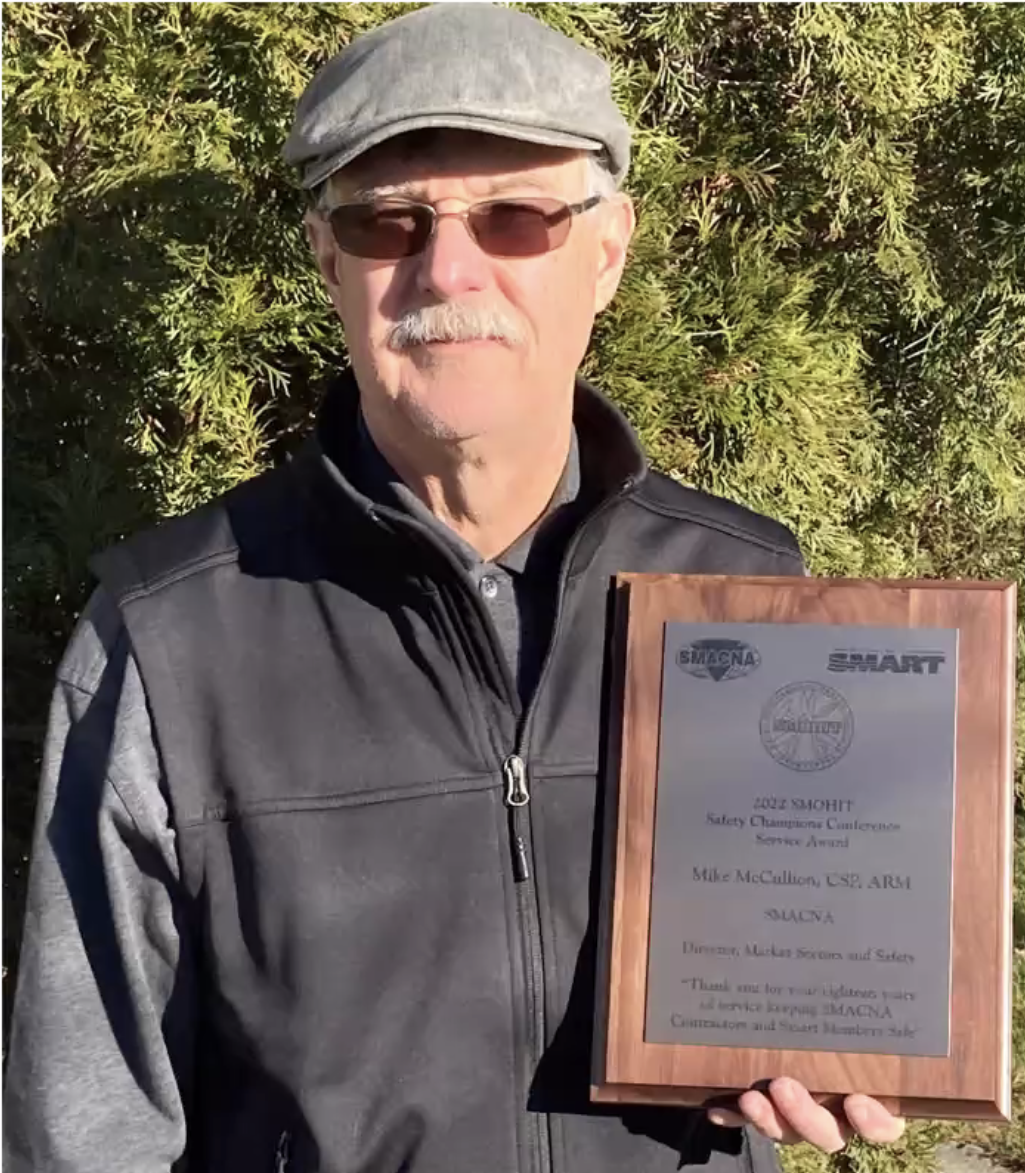 A time-honored tradition at the Sheet Metal Occupational Health Institute Trust (SMOHIT) Safety Champions Conference is to honor those in the industry who have fostered in practice a true safety culture. The Safety Champions Awards accepts nominations throughout the year and awards those who have taken initiative in the name of the physical and mental well-being of those around them.

The Safety Design Awards, also a tradition, recognizes members of the Sheet Metal, Air, Rail and Transportation (SMART) workers and the Sheet Metal and Air Conditioning Contractors’ National Association (SMACNA) for designs they create in hopes of promoting safety in their union. This year, winners received T-shirts adorned with their design, for 300 members of their local.

The first award recognized Mike McCullion, who recently retired as the director of market sectors and safety at SMACNA. Since the creation of the conference, McCullion has been a contributor, supporter and coordinator, making the conference what it is today and what it will be in the future. 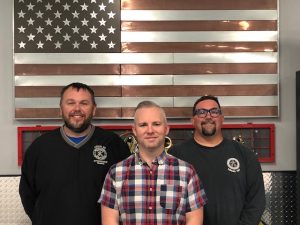 The Safety Champion honorees, recognized throughout the conference, included:

Leibold Inc., Safe Driving Campaign, Pottsville, Pennsylvania
Leibold Inc. employees have worked more than 67,000 hours in 2021 with zero injuries. The company’s safety culture is largely due to Clayton Leibold, who became president in 2012. He believes a safety culture is developed from safe daily habits built over time. Serving sheet metal Locals 19 and 44, Leibold Inc. leads a drivers’ safety class, which accompanies all company vehicles for foremen. The course, taught by Leibold’s fleet manager, consists of a refresher course of safe driving practices along with job-specific instruction, such as hauling equipment and safe winter driving. Since the course was created, sheet metal workers have participated in 2,000 hours of training in three local counties.

Richard Pfeil, Sheet Metal Workers Local 33 North Central District, Fairmont, West Virginia
In summer 2021, Richard Pfeil was working as a journey-traveler in Lordstown, Ohio, for De-Cal Mechanical at the Ultium Cells Battery Plant, a joint venture with General Motors to mass-produce battery cells for electric vehicles. During a shift, part of a large, heavy pipe rack shifted and fell onto an ironworker, cutting his arm down to the bone. Pfeil took off his belt and applied it to the injured arm as a tourniquet, slowing the bleeding. Pfeil recently earned a safety award from General Motors for his quick action.

Nicholas Studenko, Sheet Metal Workers Local 27, Farmingdale, New Jersey
Since Nick Studenko was asked to participate in the OSHA 500, first aid, CPR and AED classes in 2015, he has transformed Local 27’s safety training. His passion for safety, and getting his fellow brothers and sisters home safely, extends to his work at ExxonMobil Research and Engineering, where he’s worked on the design side of multiple projects, all with the mantras “Nobody gets hurt” and “Accidents are 100% preventable.”

Jesse Greene, Sheet Metal Workers Local 399, North Charleston, South Carolina
Jesse Greene became an instructor at Local 399 in 2014 and made safety a priority, enforcing safety on the job and in his classes. A year later, he completed the OSHA 500 course to become the local’s OSHA instructor, a position he holds to this day. In 2019, he was asked by Savannah River Remediation, the liquid waste contractors at the Savannah River site, to become a member of its safety personnel.

Andrew Cook, Lead Instructor, Sheet Metal Workers Local 55, Pasco, Washington
Andrew Cook became a lead instructor at his alma mater of Local 55 in 2018. Under Cook’s leadership, his students built and equipped a trailer for the local fire department to use in grease fire demonstrations, and he teaches all the local’s first aid, CPR and OSHA 30 courses, often traveling to outlying areas to make sure members are trained. During the COVID-19 pandemic, Cook went above and beyond to make sure the local’s facilities were disinfected and protocols were met so students could come to class safely and employees could return to work.

Sean Webb, Joe Potesta and Ricky Coleman, Sheet Metal Workers Local 20 JATC, Indianapolis
When first-year apprentice John Walker returned to Local 20’s training center after lunch in January 2021, he didn’t feel well — his legs were shaking, he was lethargic and his arm was tingling. Moments later, he was on the floor and he’d stopped breathing. Instructor Sean Webb began chest compressions while emergency services were called, and Joe Potesta (now a member of the ITI field staff) monitored Walker’s pulse while Ricky Coleman fetched the AED. The immediate response of these three instructors was due to their training — Webb and Coleman had taught CPR and first aid the week prior — and Walker survived. 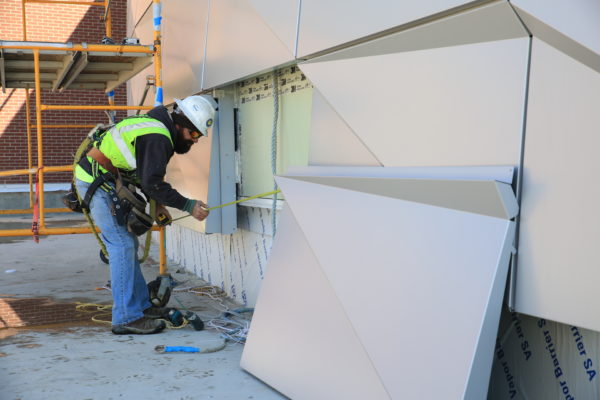 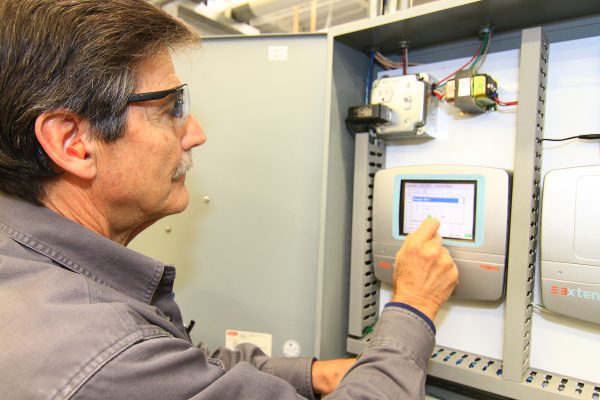 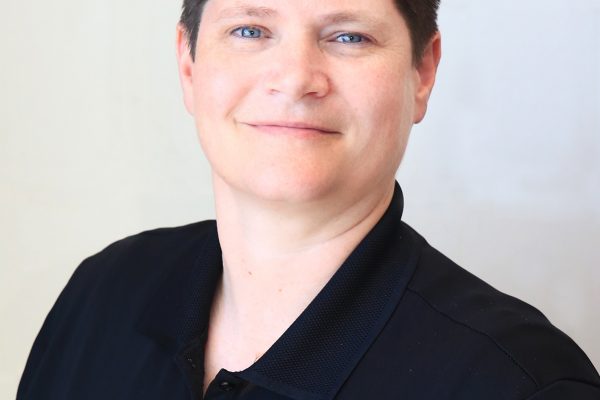