KANSAS CITY, Mo. – Skills USA’s 47th annual National Leadership and Skills Conference came to Kansas City, Mo. June 19-24 to shine the light on the nation’s best and brightest in trades from beauty technician to sheet metal work. The International Training Institute (ITI), the education arm of the unionized sheet metal and air conditioning industry, partnered with Skills USA to raise awareness of the ITI, with 3,000 students competing in the building trade categories on the high school and college levels.

“They said because I’m a junior I shouldn’t expect anything,” Olivia said. “You’re supposed to go get the experience (at the competition), go back as a senior and win. But I won, so I can come back next year and try to do it all again.”

As the only girl in her sheet metal class at school, Olivia was aware she was a minority in the competition. Only two females competed in the nationwide sheet metal competition. Olivia credits her teacher, John Fitzgerald, for helping her succeed.

“I figured out how special it was when people got excited (when I won),” she added. “I hope more girls come into the sheet metal trade.”

Barbara Keech sees how far the impact of her daughter’s win can reach in the community and the industry. Watching her 5-foot-6-inch blonde daughter stand next to large bearded men in the competition was a proud visual, she said.

“I am so excited for her,” Barbara Keech added. “She’s always liked to help my dad in his workshop, so it was right up her ally. I totally supported her. I’m so glad she found something she loves doing. It helps if you like what you do.”

This year marked the first time ITI co-sponsored the welding competition in order to educate students about secondary education and career training ITI can provide. The partnership between Skills USA and ITI allows for the exchange of information, so schools with Skills USA programs can reach out to the professional community for mentorship, expertise and guidance, while ITI can recruit from a talent pool that already understands and practices leadership skills. ITI has contacts at each of the students’ respective schools. The partnership also will eventually allow Skills USA to track their graduates through the sheet metal industry and check on their progress.

“We were impressed with the sheer amount of talent displayed at this year’s competition, especially in the sheet metal, HVAC and welding categories,” said Larry Lawrence, instructional development specialist with ITI. “With this caliber of young talent, and the partnership between Skills USA and ITI, the future of our industry is a bright one.”

In the high school sheet metal category, aside from Olivia’s gold win, Hunter Crook of Monroe, NC earned the silver and Alec Higgins of Jefferson, Iowa took home the bronze. In the college/post-secondary group, John Halwix of Elgin, Ill. received the gold award; Allen Travelstead of Fitzgerald, Ga. earned the silver; and Derek Daufeldt of Bettendorf, Iowa took the bronze.

In the HVAC high school category, Jeffrey Nelson of Palmer,Mass.earned the gold award; Christopher Kuhn of Oberlin, Ohio took the silver; and Bradley Higdon of Hollywood, Ala. won the bronze. In the college/post-secondary group, Connor Stidham of Henderson, Nev. earned the gold award; Robert Scott of Elizabethtown, Ky. won the silver; and Andrew Beckman of Norfolk, Neb. took the bronze.

In the high school welding category, Tim Saxton of Cambridge,Minn.earned the gold award; Kaleb Parsch of Attica, Mich. won the silver; and Evan Vogler of Petersburg, Ind. took the bronze. In the college/post-secondary group, Spartak Matvyeyenko of Sacramento,Calif.earned the gold award; Blake Parks of Torrington, Wy. took the silver; and Micah Hoover of Williamsport, Pa. received the bronze.

More than 15,000 apprentices are registered at training facilities in the United States and Canada. The ITI is jointly sponsored by Sheet Metal Worker’s International Association (SMWIA) and the Sheet Metal and Air Conditioning Contractors’ National Association (SMACNA). ITI supports apprenticeship and advanced career training for union workers in the sheet metal industry throughout the United States and Canada. Located in Alexandria,Va., ITI produces a standardized sheet metal curriculum supported by a wide variety of training materials free of charge to sheet metal apprentices and journeymen.

For additional information about Skills USA, visit the website at www.skillsusa.org. 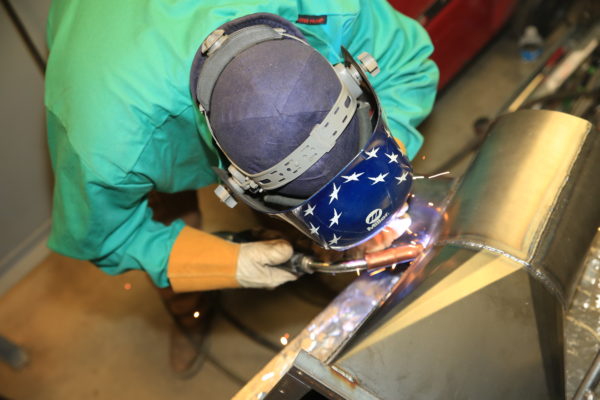