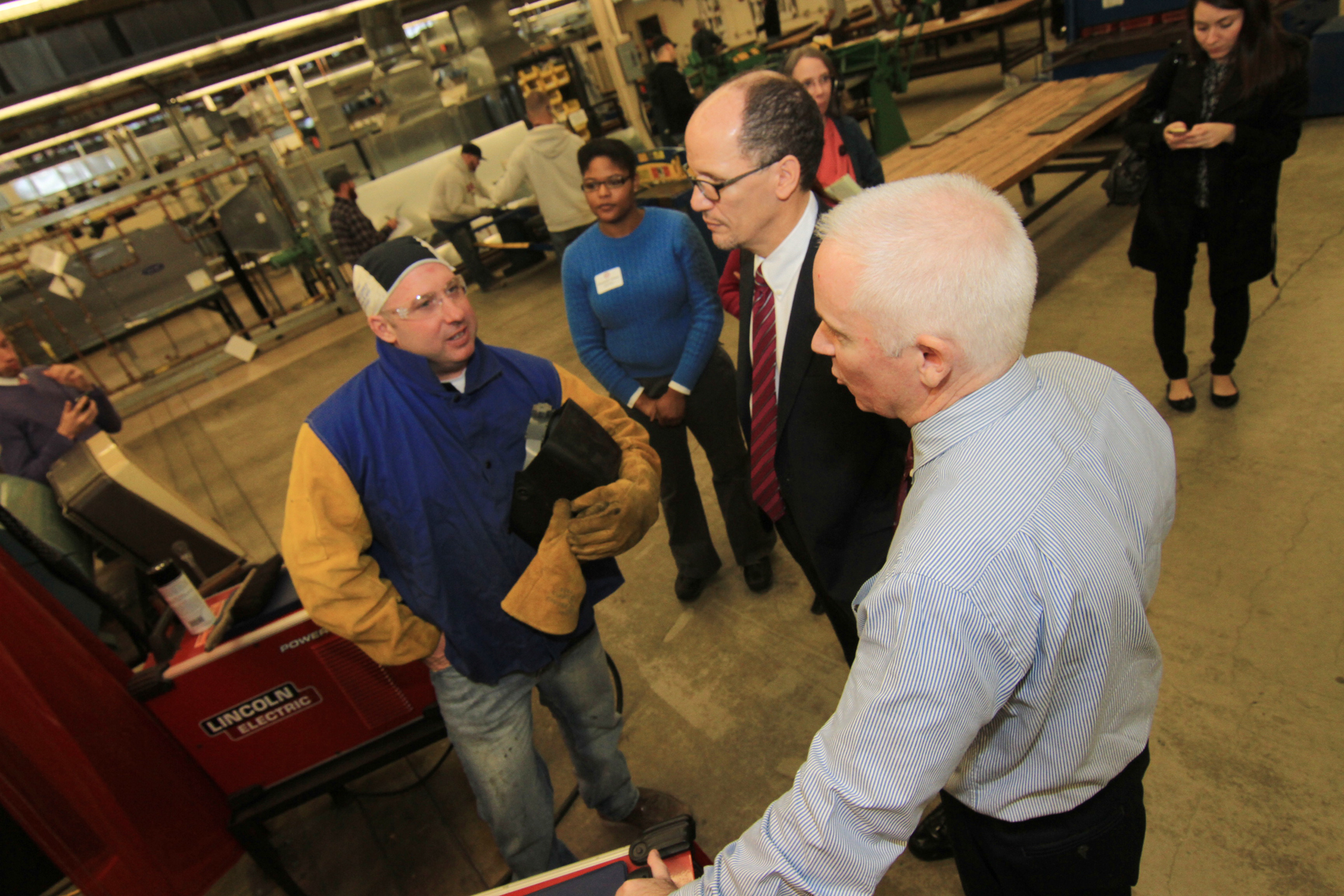 U.S. Secretary of Labor visits Local No. 17 in Boston

When Mark McKunes left the Air Force Reserves as a firefighter, he searched for a new career. His two brothers and cousin are union sheet metal workers, and whenever he drove around the city of Boston with his twin brother, he would point out all the projects he helped build. The work – and the passion for it – stuck with him.

“(My brother) always said, ‘See that building? I built that,’” said McKunes, a first-year sheet metal apprentice. “It’s a passion. ‘I built the city of Boston.’ You put yourself into your work. I want that passion. I want that career. I want to look at a building and say, ‘I built that.’”

McKunes participated in a roundtable discussion with U.S. Secretary of Labor Thomas Perez during a visit to Sheet Metal Workers Local No. 17’s training center in Boston on Nov. 17. During the visit, Perez and Rachel Kaprielian, Massachusetts Secretary of Labor and Workforce Development, received a guided tour of the school by apprentices and training coordinator John Healy. They discussed the future of apprenticeship and labor in the United States with the apprentices and leadership of Local No. 17 and local building trades.

“I call the apprenticeship ‘the other college,’” Perez said. “Unions help build the middle class in this country. When unions succeed, America succeeds.”

McKunes told Perez he chose sheet metal as a career because of the pride in the quality of work and the brotherhood of the union.

“At 31 years old, this was a complete career change for me,” McKunes said. “I was always a reservist. (Being a sheet metal worker) is very similar. It’s a brotherhood, and you’re going to get the quality of work. We get that pride, and we build off it.”

Third-year apprentice Shamaiah Turner, 29, started college at Tulane University in New Orleans, but when Hurricane Katrina hit the Gulf Coast in 2005, her college career was swept away. It wasn’t until she volunteered building homes with Habitat for Humanity did the reality sink in – she wanted to work with her hands.

Instead of thinking she needed to continue her traditional college education, Turner found another path to higher education through Building Pathways, a pre-apprenticeship program in Massachusetts, and the apprenticeship program at Local No. 17. She’s earning college credits through her apprenticeship, and will be able to finish her college degree as well as have a career she loves and a bright future.

“Sometimes it doesn’t work out. I have friends who graduated (from college) and still don’t have jobs. I have a job. I have a career,” Turner said. “You’re learning new things, but you’re also setting up your life. You learn, when you retire, you’ll have money. When I was in high school, I learned Latin. I don’t use Latin. In the apprenticeship program, I learned to budget my money.”

“You can see the investment not just in the skills, but in the whole human being,” Kaprielian added.

Perez said his goal is to make people aware of apprenticeship and the good it does for students and their communities.

“The conversation we are having today isn’t about building structures. It’s about building careers,” he said. “There’s this other college out there, and what’s better about this option is you don’t graduate with $100,000 in debt. You’re earning while you’re learning. You’ve got this ticket. It’s portable. There’s a bright future not simply here in Boston but across the country for people who work with their hands.

“We need to take this program and other programs like it to scale. If you’re in the wrong ZIP code, opportunities can be elusive. What you’ve done with this program is expand opportunity to every ZIP code in the city.”

This year, Local No. 17 had 200 applications for a first-year apprenticeship and accepted 48. Fifteen of those students were from pre-apprenticeship programs such as Building Pathways, Helmets to Hardhats and Operation Exit. Healy said, with the proper funding, he could accept more into his program.

“You have the opportunity, and you’re taking advantage of it. You can’t just say, ‘I built that.’ You can look at your family and say, ‘I helped build your future,’” Perez said. “There’s optimism in the air. There’s a lot of work out there.”